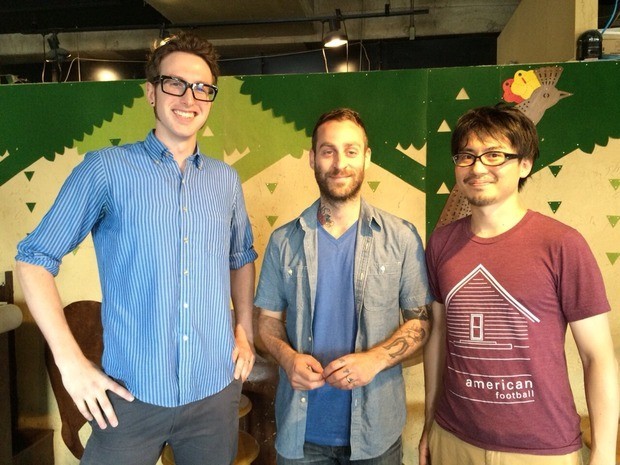 A tiny miracle is scheduled for June 2015 - Owen AND American Football will take the stage for the first time ever in Japan. We sent an unassuming message to Mike Kinsella’s A&R team, asking them if they would be interested in a short interview.

Imagine our surprise when they said YES. We wanted this interview to be special, so we focused entirely on Mike’s guitar. From pedal boards to picks and everything in between, this may very well be the most comprehensive guide to Mike Kinsella’s guitar in the history of the internet.

We’ve also got a sweet gift for one very lucky reader - an Owen shirt signed by the living legend himself! 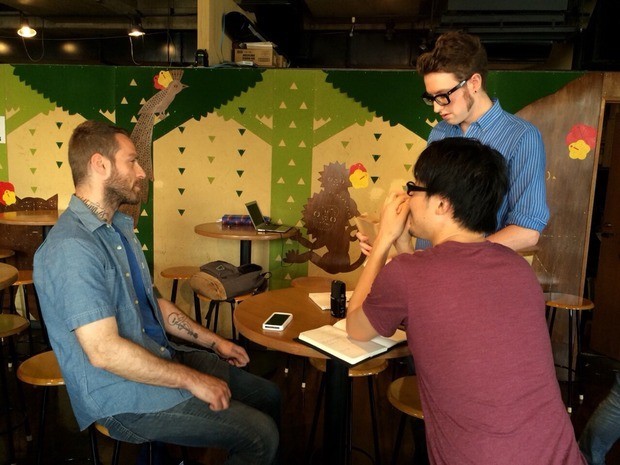 A lot of interviews talk about the mushy stuff, but we want to focus on you and your guitar. For starters, what guitar do you use when you play live?

Also, I just had both of my guitars stolen this winter in Chicago.

I loved those guitars. I get crabby about it still because I haven't found them yet. I bought a replacement Deluxe, so now I’m playing a Mexi, but the one that got stolen was an American. She was beautiful.

The Telecaster Classic… Custom... whatever, I don’t even know - it was a gift from Joe from Fall Out Boy. He's an old friend of my wife’s.

They played a show in Chicago right after my guitars were stolen. I got back stage, and he's like, “Oh, I heard about your guitar. Here, have this one.” He literally just handed it to me. It’s a great guitar. It’s better than the one I had, and I didn’t have to go out and buy a new one. 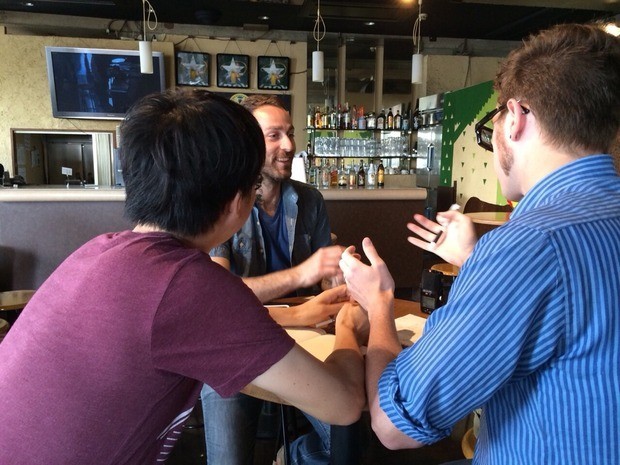 You can hear every note of every arpeggio in American Football. It sounds like you used single-coil pickups for the recordings, and yet you use humbuckers when playing live. Which sound do you actually prefer?

You guys won’t believe how ignorant I am about guitar stuff. Single coils are the one that’s like the little strip, right?

One of my new guitars has that, but the others were both humbuckers. One of the guitars that got stolen was a Telesonic. It was like a Telecaster with different pickups, DeArmond or something. I bought that guitar back in like 2000, and I played it forever. What a waste.

I don’t know that much about guitars though, so I’m gonna disappoint you. (laughs)

No worries there. (more laughs) What's your pedal board like?

(Drawing) So this is my volume pedal. It’s got this gain thing on it, so it’s really like a boost pedal. That gain is really awesome, and I use it a lot - super functional.

Maybe 2? (*After peeking at Mike’s pedal board on Monday night, it turns out it was a Super OverDrive SD-1)

I think that’s it... Ah, there’s a tuner that comes out here. That’s the most important pedal. I’m nothing without my tuner.

Nope. I probably should be using one…

The Headrush is more of a delay pedal, but I use it as a loop. It can be either one, really. There’s two or three times in each set where I’m doing something and I record it, then loop it back. It doesn't happen too much, but I do what I can to get it to sound more like the record. 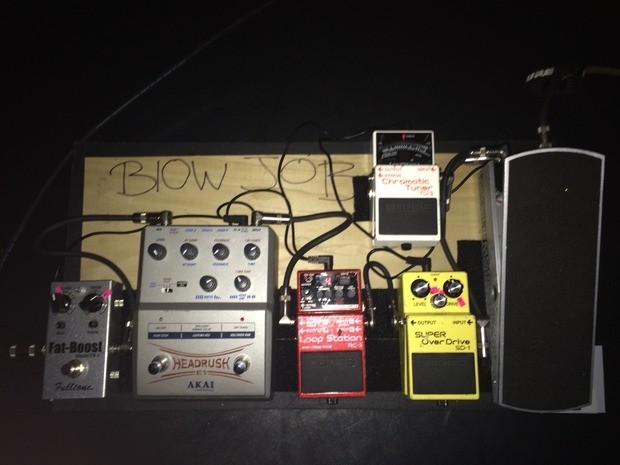 What kind of amp do you use?

We try to use Twins whenever possible. (Fender Twin Reverbs) But when we have to fly somewhere, we use whatever they give us. (laughs)

We've shown up to places and there’s nothing but Marshall half stacks, and we play with that. We’re very versatile.

Speaking of versatility, let’s talk about tunings next.

First off, how did you come up with these monsters? 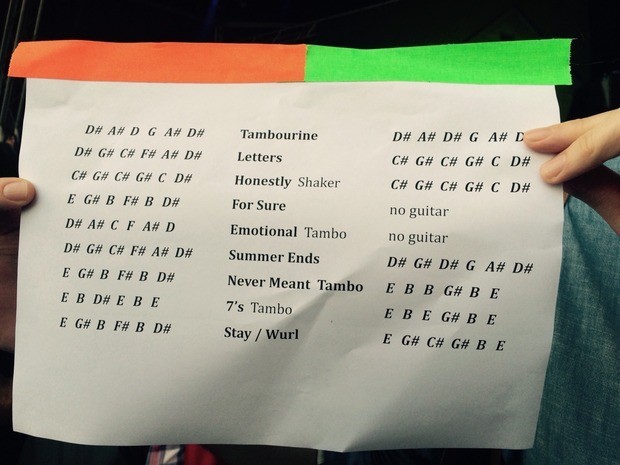 A lot of these won’t look as scary if you look at them like this. We dropped a lot of them a half-step, so this C#G#C#G#CD# tuning is really just DADGAD with a little extra sauce.

At the time, Steve and I didn't really know what we were doing. We were like, hey, it'd be cool if we could get to that note. So we'd just ::BRAMP:: tune it up, and then find out what tuning we were in afterwards. (laughs)

I like those grey ones. (Whips pick out of wallet) 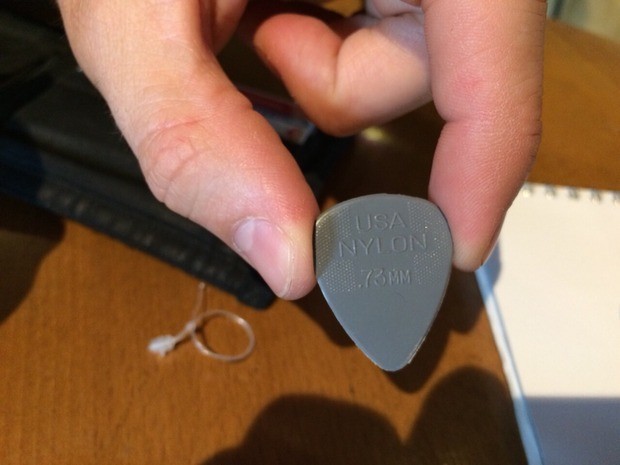 I like a little grip on my picks. Everything about this is good - a little thick, with a little ply. But in my mind, isn't this what everyone likes?

I have one of those orange ones just because I need extras. (Pulls out backup pick) Nobody likes this one. They're just too slippery. Here, get this one - FUCK YOU, ORANGE PICK (laughs) 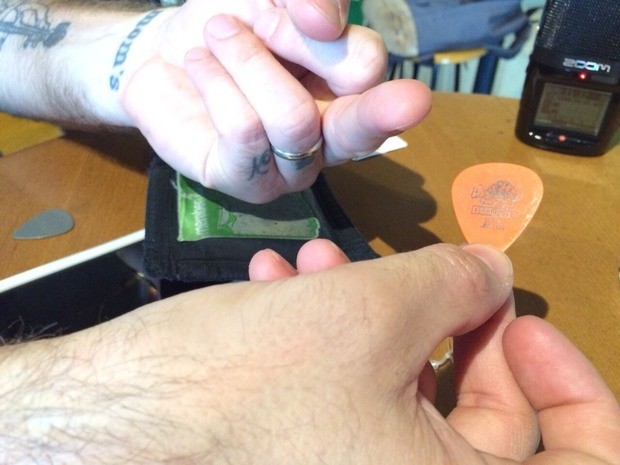 What gauge strings do you use? Any favorite brands?

You know - that’s another thing, I’m so ignorant about this stuff. (laughs)

I mean, I have a punk background. We couldn't afford anything, so we just bought whatever was cheapest. Now we have a guitar tech who makes all the orders. You should actually interview him, he's a real guitar nerd. (laughs)

He looks super busy retuning all your guitars. (laughs)

That’s another thing. When my guitars were stolen, the police were asking me all sorts of questions about the pickups and other really specific details. I had no idea what they were talking about, so I had to write my guitar tech saying, “Hey Mike (his name is Mike too), my guitars were stolen. Can you tell me about them?”

I didn’t know what the pickups were called or anything. He wrote me back, and he’s like, “You idiot - they’re your guitars.” He had to tell me about my own guitars. And he was right. (laugh)

The music that you’ve created through Owen, American Football, and countless other musical outlets has inspired and influenced people all over the world. Your music has permanently changed the way we approach the guitar. One of the biggest surprises I had when I moved to Japan was that there were people here that love your music every bit as much as I do. What’s that like for you?

It’s surprised me too.

A lot of people have come to see me play here in Japan over the past 10 years. And it’s always the same number of people coming to the shows - it’s such a steady fan base. I mean, it’s not like I’m getting MORE popular or anything. (more laughs)

But I’m always amazed at all these people who come out to see us play here in Japan. They really make these shows special.

What’s it like going back and revisiting the old American Football material? How does it feel taking it on stage and playing it front of an audience?

It’s so much fun! You know, I even kinda dreaded it at first. I didn't know if I’d feel weird singing those words I wrote 20, meh, more like 15, years ago. But it’s really been a lot of fun.

I’m even re-relating the songs to myself every night before we play so I can get into it. It’s been really rewarding. The lyrics are a lot like what’s going on now in my life, so it’s a cool experience. It's really been a lot of fun.

Thanks for talking with us! We’ve got tickets to the show tonight (Owen’s Sunday solo show) and Tuesday, so we’ll see you there!

That’s good. We’ll have a little practice show on Monday night, and then Tuesday night will be the real thing. Just don't tell Minoru (the man behind the magic, Hatakeyama-san himself) how bad Monday’s show is going to be. (laughs)

One last thing before we go - would you sign this shirt for us? We want to give it away as a present to one of our readers.

Cool! These shirts were literally made to be written on. 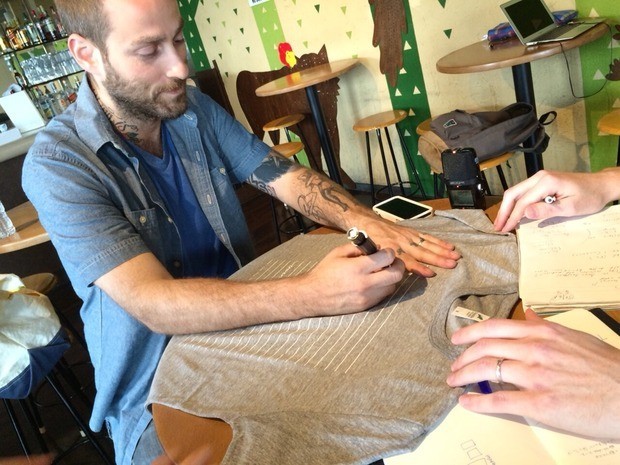 Whoa, signing shirts is harder than it looks. That’s actually about as good as my signature looks anyway. Just fill in the lines, and we’re done! Sweet. 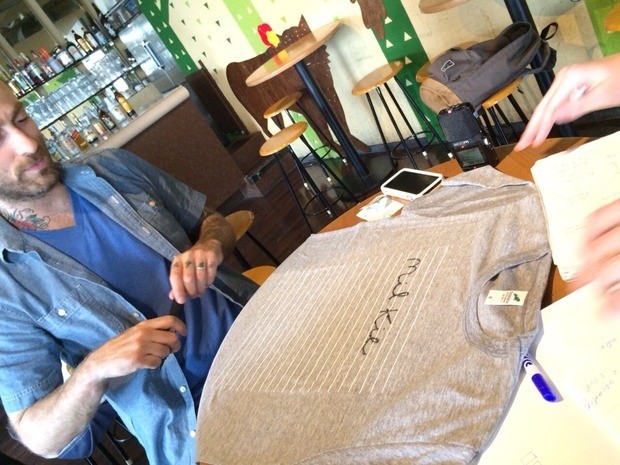 ------- We’re giving away this Owen T-shirt (Medium) signed by Mike Kinsella himself to one very lucky reader. Just share this interview on Twitter by 3 pm on Tuesday, June 30, 2015 for your chance to win a piece of Kinsella history!

Special thanks to Mr. Hatakeyama (And Records, http://www.andrecords.jp/) for bringing Owen and American Football to Japan and Owen rep Amber Leone for setting up the interview.